By Liz Johnson
The following article was taken from Arrive Magazine.

Maura’s Kitchen, a Peruvian restaurant in Nyack, N.Y., started out serving a humble menu of rice and beans from a steam table. Today, it’s a celebrated tapas lounge with frothy pisco sours and flickering candles.

In just a few short months, the restaurant went from a place where Latin American immigrants could find a satisfying lunch and a taste of home to a date-night destination for hipster foodies ready for a culinary adventure. Its story is indicative of a trend that’s happening all over the Northeast: Chefs who are second-generation immigrants are taking their culinary heritage, mixing it with an American sensibility, and forging a new style of cuisine.

Just as the Italian-Americans of a generation ago broke new ground serving spaghetti and meatballs at red-checked tables with Chianti-bottle candles, these coming-of-age chefs are rethinking menus, décor and even marketing—and turning the tables on a Euro-centric culinary scene. 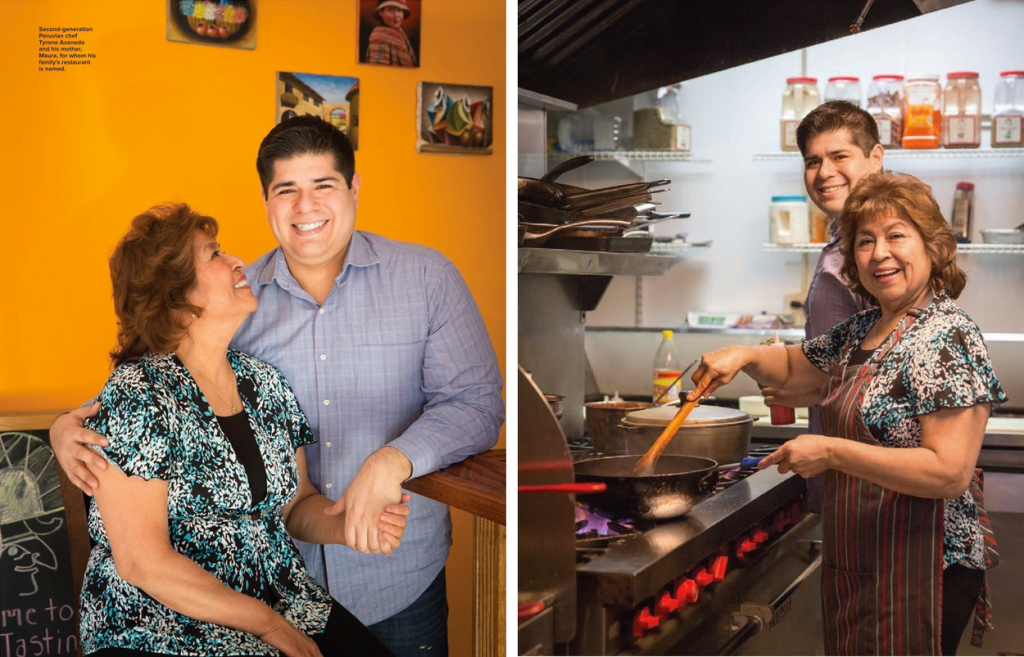 “We’re seeing influences from a variety of different countries in higher-end restaurants,” says Bret Thorn, the senior food editor of Nation’s Restaurant News, a trade publication. “It used to be just French, and sometimes German and a little Italian.”

A few pioneers led the way, notably Korean-American David Chang of Momofuku fame, who combined Korean dishes, American ingredients and French training with his love for Japanese cuisine. But today, savvy diners can find menus as varied as the American population.

And in Nyack, Tyrone Azanedo, the son of the Maura of Maura’s Kitchen, is booking the restaurant full of folks in love with the bold, exciting flavors of Peru, like a fresh fish stew with an aji amarillo or crispy fish bites with a spicy pepper dipping sauce and a honey drizzle.

Fukushima says Daikaya Izakaya is “a fun place to be right now. I kind of feel like this is what José [Andrés] was dealing with when he was bringing tapas to the D.C. area.”

Fukushima was born in Okinawa, Japan, where his mother is from, and lived in Hawaii, where his father is from. Being an Army brat, he also lived in Germany and around the U.S. He learned to cook under Andrés, opening the chef’s Washington restaurants and working behind the groundbreaking minibar within Café Atlántico, which served dishes like a spherical olive that popped and melted liquid into your mouth.

“I let pretty much everything influence me,” Fukushima says. “I’m open to anything.”

His new restaurant, Daikaya Izakaya, is really two restaurants in one. Downstairs is a Sapporo-style ramen bar, where the noodles are imported special for the restaurant from Japan. Fukushima makes the ramen traditionally: completely by the book. Upstairs is the izakaya, or Japanese-style pub, where small plates are on the menu and whim and fancy are in the air.

“I’m still learning how to do ramen,” he says. “So it wouldn’t be right for me to start messing around with ramen before I have two, three, four years of making traditional ramen under my belt.” But upstairs, he practices what he calls “freestyle izakaya.” “It’s kind of like jazz. It’s the way you feel—it’s the moment. And it just kind of changes, like when you’re jamming out to a jazz session. It’s wherever the moment takes us.”

Take his potatoes. They’re a riff on a Japanese dish in which potatoes are made into noodles (like gnocchi, but long and skinny) and topped with butter and a cod roe and soy sauce.

“The flavors are fantastic,” he says. “But I don’t know how many Americans would accept potatoes that look like noodles. So I started using hash browns.” He blanches and smashes tiny red bliss potatoes, then deep fries them and tops them with Irish butter, cod roe and a drizzle of soy sauce. The dish sells like crazy.

But sometimes a classic but unfamiliar dish can backfire. At Talde, the restaurant in Park Slope co-owned by Dale Talde, the Filipino dessert halo-halo was too weird even for a chef considered an adventurous eater. The dessert is made with shaved ice and evaporated milk, and you can add anything from beans to candied fruit to jelly.

Talde served it to Eric Ripert, the chef-owner of the top-rated Le Bernardin in Manhattan. “He was like, ‘no thanks,’ ” Talde says, laughing.

Another dish people couldn’t wrap their heads around, he says, was a mango salad based on a recipe his grandmother used to make. The mangos are dressed with a pungent shrimp paste and lots of salt. “Half the people were like, ‘What is that funk?’ ” says Talde. 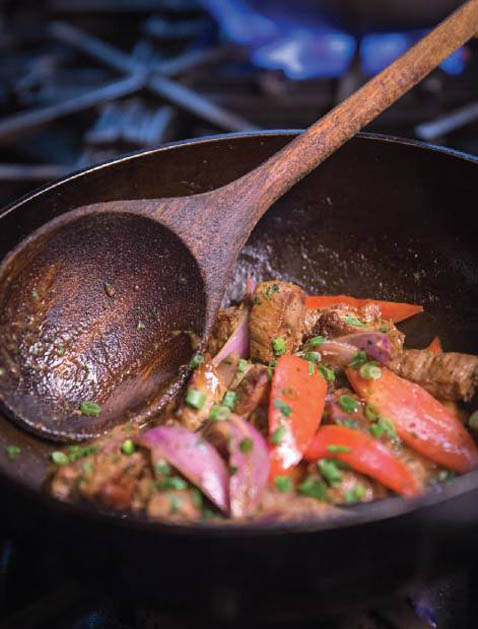 His chore turned into an exciting challenge.

“Filipino food was always something that I loved to eat, but didn’t know how to make. And was turned off by the fact that I didn’t get it right away,” he says. He’d make a chicken adobo, trying to copy his mom’s chicken adobo, and it didn’t taste the same. So he started watching her. Intently. “Studying the little things, like how my mom sautés an onion. There’s the way she sautés an onion and the way I would sauté an onion. Little things like that changed it for me.”

Jason Wang, of Xi’an Famous Foods, knows how to cook his father’s recipes, too. “I believe a business owner needs to know how to do everything, and know what is wrong if something does go wrong,” he says. “And these are old family recipes.”

But what he probably knows best: how to market them. When he was still in college, at Washington University in St. Louis, he designed a website for his father’s first restaurant, which is still in the basement of the Golden Shopping Mall in Flushing, Queens. By the time Wang joined the business, he’d set up a Facebook page and a Twitter account, and was encouraging his customers to Instagram photos of their noodles.

“I’m not so sure how (my father) would be able to market to mainstream Americans,” Wang says. “He would be very focused on appeasing only the people in Flushing. I like to look at the big picture and position ourselves and cast a bigger net.”

He has done that by capitalizing on the authentic flavors of a previously obscure region of China—Xi’an is a city in north-central China—and balancing the appeal between Chinese people looking for something familiar and Americans hoping for something exotic. When the Chinese see the Americans, they feel a sense of pride that other people like their food, he says; when Americans see the Chinese, they feel like they’re getting an authentic meal.

“They feed off each other,” he says.

When Wang opened Biang!, a noodle house in Flushing, he found a way to do a mash-up of authentic cuisine with a cool setting. The restaurant, which has a big bar and an outdoor garden, serves the same menu as Xi’an Famous Foods but has an ambience more conducive to a relaxing meal. “We brought the hipster Brooklyn into Flushing, if you will,” he says.

At Maura’s, Azanedo and his family started the business cautiously, serving simple but delicious roast chicken and sides to the lunch crowd. Even the sign says “Latin American and Peruvian cooking,” because Azanedo didn’t want to have too narrow of a niche. Over time, though, the menu crept toward Peruvian tapas, attracting a dinner crowd.

“At one point, we’d lost the takeout crowd but didn’t have the dinner crowd,” Azanedo says. “But little by little, people believed in us and what we were doing, and [started] coming back.”

People who have traveled, says Azanedo, are seeing Peruvian food as its own cuisine. “So we get the most authentic ingredients we can, and that really sets us apart.”

Not to say there isn’t a little whimsy at Maura’s, too. Azanedo turned a lime-flavored potato dish traditionally known as causa into a salmon causa roll.

“Imagine a sushi roll,” he says. The potatoes are layered with smoked salmon and avocado and sliced into pieces easy for sharing.

There was more than a little whimsy in the business plan, too.

“We didn’t really have a total business plan,” Azanedo says. “That’s not good at all. But we didn’t really know what we wanted. Then once I saw what customers wanted, I knew. In Nyack, people want dinner and a cocktail.”

What kind of dinner that will be in the future—and how to encourage people to try it—is still up to these young chefs to figure out.

“We’re defining the roles,” Talde says. “We don’t fit in any box. We’re building our box right now, as we speak.”