Peruvian Food Is On Fire Right Now; Here’s Where to Get It in the Hudson Valley

The following article was taken from hvmag.com 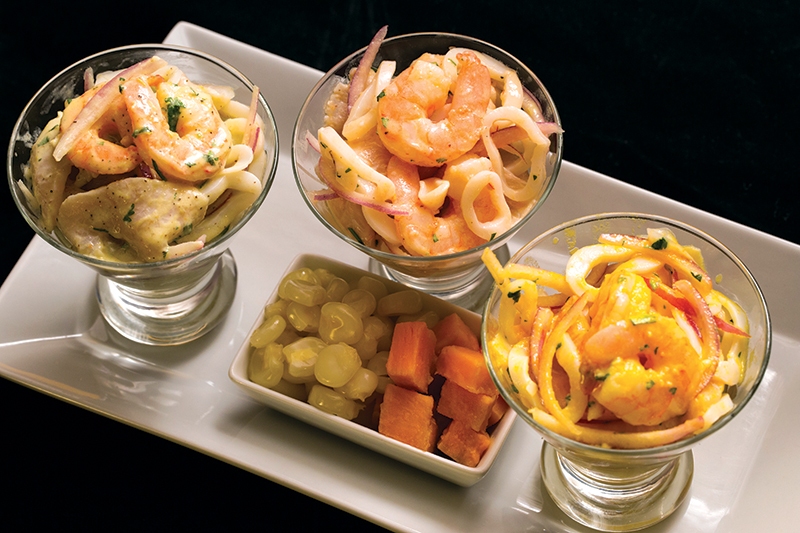 At the 2014 World Travel Awards — yes, this is a thing — Peru was named South America’s Leading Culinary Travel Destination. Don’t be surprised — it won the same honor in 2012 and 2013. In addition, Frommer’s picked Lima, the capital city, as its Top Food and Drink Destination of 2012, noting that the region’s “cultural miscegenation — a rich stew of Spanish, African, Chinese, and Japanese — is reflected in its culinary fusion.” The country has indeed become a destination for food-focused tourists, but Hudson Valley residents don’t need to plan a trip to the real Machu Picchu to sample the flavors of Peru.

There are several Peruvian enclaves in the Valley, including Newburgh and in Rockland and southern Westchester counties. The food served there reflects the geography of Peru, which comprises coastal, Andean highlands and jungle landscapes, and its history, from Pre-Inca and Inca times through the Spanish, Basque, African, Asian, French, Italian, and British immigrants who brought their cuisines with them.

Machu Picchu, a restaurant which has operated in Newburgh for 25 years, introduced the Valley to Peruvian food and décor. It has since been joined in Newburgh by Don Fernando Restaurant, in Suffern by Taita Restaurant, and in Nyack’s Maura’s Kitchen. They all serve the traditional dishes of Peru, which gets much of its distinctive flavors from Peruvian aji chili peppers — of which there are many, says Tyrone Azanedo, who owns Maura’s Kitchen in Nyack with his mother, Maura Azanedo. “There are so many different kinds of aji, all with different flavors,” he says.

Maura’s Kitchen serves up a variety of popular Peruvian dishes, such as jalea fried seafood (left). At right, mother and son owners Maura and Tyrone Azanedo in their Peruvian eatery

Maura’s Kitchen actually opened about four years ago as a more traditional Spanish deli. “We were scared to open as just Peruvian, but along the way my mom cooked Peruvian food on the weekends, and people really took to that,” Azanedo says. “After about eight months in, we went full Peruvian.”

The change was enhanced by that year’s Mistura Food Festival, which celebrates Peruvian cuisine every September in Lima. It is the biggest food festival in Latin America. “The festival was the biggest ever, and from there Peru really started promoting itself,” Azanedo says.

He says the goal at their restaurant was “a twist on the traditional, to take the flavors of Peru and change things.” They started by changing the décor, and they acquired a liquor license, in order to serve Peru’s best-known export, the Pisco Sour. Pisco is a South American brandy-like liquor distilled from white muscat grapes. Shaken with simple syrup, lime or lemon juice, and raw egg whites and then topped with bitters, the Pisco Sour aptly represents the tangy, sweet, summery vibe of the Peruvian culture and cooking.

“We make our own sour reductions and syrups here, and we use Porton Pisco, a high-end Peruvian brand of pisco,” he says. He and his mother, both cooks, use it in some of their food dishes as well.

Maura’s Kitchen has a bistro-slash-cafe ambiance and serves up a wide menu of Peruvian offerings, including traditional dishes that newcomers would be wise to sample:

Pollo a la Brasa
​This staple is a rotisserie chicken — only so much more. It’s marinated in a highly classified mixture of vinegar, Peruvian beer, soy sauce, chili, and brine for 24 hours, then slow-cooked for four hours. “The spices are a secret,” he says. “My mom keeps that close to the vest.” It is served with hand-cut fries with garlic and cilantro, and a mixed greens and avocado salad.

Ceviche​
“Ceviche is a staple of Peruvian food,” he says. To the uninitiated, ceviche involves mixing the freshest raw seafood with lime juice, so that the citric acid cooks the fish. Cilantro, salt and one of the many aji chili peppers add an infinite variety of possibilities. “We have tilapia, shrimp, scallops, yellowtail, octopus — it’s kind of endless,” he says. Ceviche typically marinates 20 minutes or so, but we cut it thinner here to do it in five minutes. It’s super fresh that way, and mixing the spices up makes them all different.”

Arroz Con Pollo
​Not your typical chicken-and-rice. “We use cilantro-infused rice with our chicken,” he says. They also prepare an arroz verde with scallops and shrimp, served with papa ala huancaina — boiled potato with cheese sauce, turmeric, and yellow chili.

Jalea
​Another Peruvian tradition, this plate of lightly fried seafood takes your typical bar-menu fried calamari to another level.

Related: Here’s how to make your own Pisco Sour cocktail

For those interested in trying to replicate these flavors at home, good luck. As with all cuisines, Peruvian food depends on the ingredients, and they are not easy to come by, Azanedo says. “We get our stuff from an importer in Queens. I’m not sure where to get the ingredients in the Valley,” he says. These staples include only the freshest seafood, the highest quality herbs like cilantro, soft-skinned limes (“We hand-squeeze all our limes — that’s really important,” he says), Peruvian purple corn, specialty hot sauces and, of course, the aji peppers. But why go to all the trouble, when the experts are right around the corner?